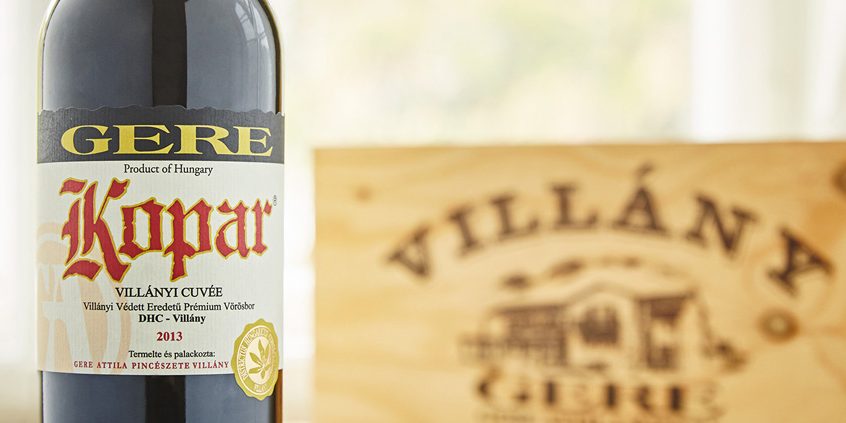 1997. Do you remember what happened twenty years ago? This was the year when headlines all over the world were occupied by news of the first cloned animal, Dolly the sheep, the Hollywood blockbuster Titanic made moviegoers reach for their handkerchiefs, the Hungarian water polo team led by Dénes Kemény made its international breakthrough by becoming European Champions… and this was the year when the success story of the iconic Kopar Cuvée began. And now the subscription for the latest vintage is starting.

Kopar Cuvée was in many ways a pioneer on the Hungarian market: it was one of the first wines to come with an invented brand name and since then it has become so successful that for many winelovers this is the first name to occur when they think of Villány reds. The introduction of subscription modelled on the Bordeaux en primeur system was also a novelty in Hungary and it enabled winelovers to secure the desired quantity at a favourable price before the upcoming vintage actually hit the market.

In the 1990s the focus of winemakers in Villány shifted to blends made from Bordeaux varieties. By that time Cabernet Sauvignon, Cabernet Franc and Merlot were already highly popular in the wine region. Based on the climatic and geographical conditions there was every reason to believe that these varieties would work well in Villány.

Kopar has been a brand name from the very beginning; it was decided that the top wine of the winery should be given the name of the vineyard with the highest prestige and the grapes for Kopar have always been selected from the best vineyards. This wine is produced only in outstanding vintages and the current release is the thirteenth since the first vintage in 1997.

In the annals of wine history the year 2000 went down as „the vintage of the century” and it proved to be a milestone in the history of Kopar as well. This was the vintage that brought widespread recognition for the top wine of Attila Gere’s winery. The 2000 Kopar is still held in high esteem by collectors and its reputation is enhanced by the fact that it has never ceased to offer exceptional drinking pleasure.

The basic concept has remained intact over its 20 year history though some minor adjustments were made to improve quality. It is only natural that yields are lower today than they were in the beginning. The dominant variety of the blend used to be Cabernet Sauvignon but starting with the 2006 vintage – widely considered to be one of the most elegant Kopars ever produced – this has changed. Since then Cabernet Franc and Merlot are the dominant varieties with Cabernet Sauvignon’s contribution reduced to 10%. At the same time there were changes in the oak management as well: in order to give more prominence to fruit 40% of the wine is aged in large barrels.

The latest vintage 2013 is notable for its elegance, it is a wine of sophistication and finesse with an emphasis on fruit. The wine can be subscribed for a month between 15 April and 15 May 2017. To increase its collectibility the wine is sold in exclusive wooden cases containing 12 bottles.