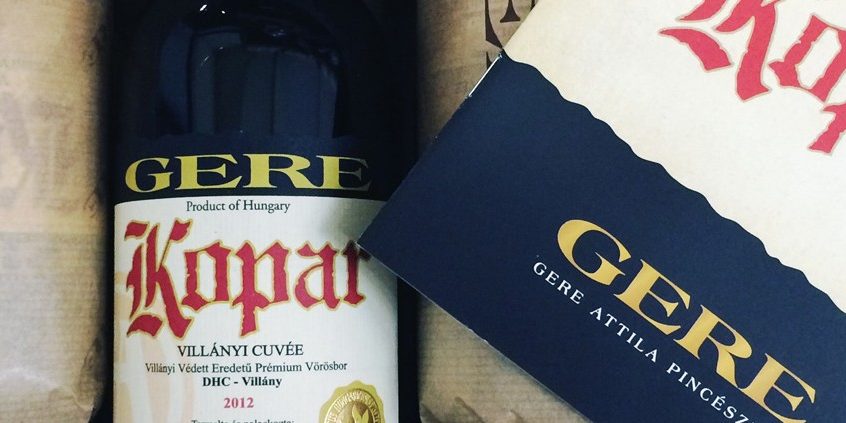 The history of Kopar

In the first half of the nineties the attention of the most Villány wine makers – among them us – was attracted by the wines made from the so-called Bordeaux-varieties: Cabernet Sauvignon, Cabernet Franc and Merlot. This was obvious because in this decade on large parts of the vineyards these varieties were grown, and the natural characteristics of Villány suggested that it was worth to deal with Bordeaux blends.

The inspiration was given, and for the sake of the highest quality execution a small team of Villány wine makers went to Bordeaux, France for a study tour. The returned with lot of experiences and observations, they were deeply impressed by the big chateau-s and the tasted wines. As the effect of these experiences Attila Gere started to seriously think about a Bordeaux blend. As the result of this the first Kopar was born in 1997.

Kopar was a fancy name in the year of start. It got its name after the best vineyard of the winery as the flagship wine of the winery. We keep this tradition since then.

Long time passed since the 1st Kopar, it is interesting to check the changes of the vintages and wines:

We considered it important to make the 1st Kopar from the grape of an extraordinary year. Then the ratio was 40% cabernet sauvignon, 40% merlot and 20% cabernet franc. The cuvee wines were aged in new barrique barrels. In its nose dried fruits, plum, and cranberry occur. In the rich sip nice acids and barrel spices accompany the cranberry taste character. Worthy debut!

Very nice vintage about balance. Thanks to the nice acids long lasting wines were born. The rich spiciness of Kopar 1999 amends the ripe fruitiness which has almost a sweet effect.

One of the Kopar-classics. After the short, but snowy winter an early, hot summer and long, dry autumn followed, which was beneficial for the late ripening varieties. The offcome was gorgeous: rich, complex wine, well structured, with elegance, harmony –  it is not accidentally considered as the greatest Kopar.

2002 seemed ideal until August, but the rainy period after it made the harvest hard. The advantaged slopes had great importance, but nice grapes could be harvested with much attendance. The varied year gave a colorful, amazing Kopar: it has excellent balance, the ripe forest fruits are softly intercrossed by the spiciness of the barrel.

The long winter was followed by hot summer, which resulted in concentrated, nice wines. Southern style, crushingly intense wine was born. It is an exuberant, rich fruity blend with chocolate and sweet eastern spices.

A year started late, with more rain as average during the summer – all these resulted nice acids. Does not shows it values at once, but the award of those who are patient is an amazing wine: in its nose chestnut and forest fruits, concentrated and long sip, with plum, strawberry and discreet spiciness.

One of the most elegant vintages. The long winter, the summer without extreme heat, then the long, balanced autumn gave long ageing, balanced wines. We changed the style of Kopar: since 2006 Cabernet Franc and Merlot dominate, Cabernet Sauvignon is maximum 10%. Kind, friendly wine, in its nose black berries, coffee and caramel. Full bodied, balanced sip with concentrated fruitiness, almost sweet feel.

Excellent vintage with hot summer, so the harvest happened 2 weeks before as usual to keep the balance. A real big Kopar was born, which is elegant beside of the serious body. Ripe, round wine, rich in fruits and spices. Its long aftertaste allures to more and more sips.

Balanced year, with lots of sunshine during the summer and adequate rain, which was followed by long, hot autumn. The wine is intensive fruity, with sour cherry, raspberry and chocolate in its nose. In the sip cranberry is dominant, but the spiciness is also accented.

A nice vintage full with challenges. For the rains of spring and early summer the sunny, hot summer and the shiny autumn compensated richly. In its multiple, amazing nose smokiness and red berry fruits mix with plum and dark chocolate. Wine with big body, potential and good rates – worthy for the anniversary 10th Kopar vintage!

The cold, long winter was followed by nice spring and rainy early summer. From the beginning of August until the end of the harvest the weather was nice, summer-like. The grape developed evenly in whole year, perhaps that is why this Kopar became so complex. In its nose black berries, cherry, ripe sour cherry, pepper and clove. The sip is also very rich in details, with vibrant acids, and really long aftertaste. Round, fruity wine, with proper weight.

This was the year of extremities. The winter was very cold and it snowed a lot then in the summer the dryness was great. The size of the berries was much smaller but the content of them was very fine and concentrated with a high must degree. Full wine, with various fruits, beside of this elegant barrel spices. When tasting it is very rich and complex, the fruits are accompanied by chocolate, cinnamon and mild pepper. Wine with nice balance, with serious ageing potential.