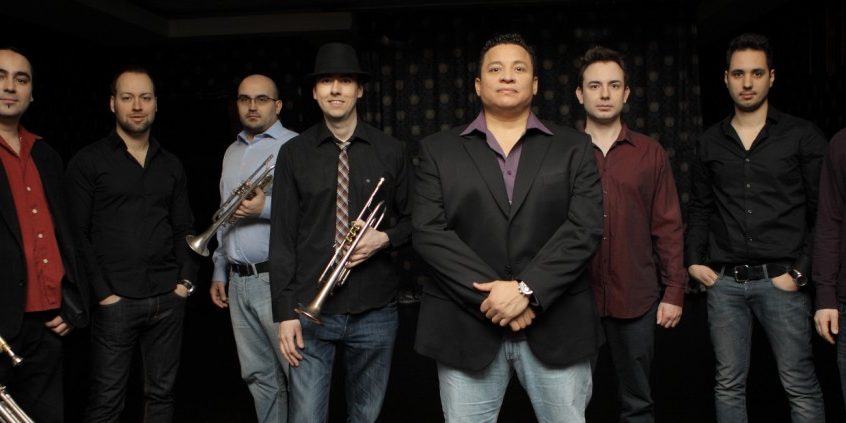 Saturday evening Barrio Latino, the first Hungarian timba-band plays in GERE Jazz Festival. The music of the band was discovered by lucky chance by Michael Lazarus, the Grammy awarded sound engineer and publisher. The first single of the band was published by the Californian Latin Pulse Music in autumn 2013. Their „Con Clave Y Tambó” single hit the world in short time. From Peru to Japan the band was got acquainted in 50 countries. We made an interview with Tamás Bodzsár, the trumpeter-song writer of the band.

Where the love of Latin music came from?

I was 16, when I first met the LP-s of Michel Camilo and Arturo Sandoval, which immediately enchanted me (despite of the fact that that time I dealt with classic music only). And then in cca. 2005 the forefather of Barrio Latino band was established. First we only played instrumental jazz, with lots of improvisations. Mainly these two launched me on this way.

How would you describe the genre what Barrio Latino plays?

When hearing about Cuban music the most still think about Buena Vista Social Club, but in the past decades it developed greatly. It was alloyed with North-American styles, and the result of this is the timba, in which our own songs belong. Timba alloys traditional salsa music with funk, pop and jazz elements, and although it is a popular genre playing it is a great challenge for even skilled musicians. Because of the instrumentation of it is more complex and unique than the traditional salsa’s. It means a style which is easier to absorb, because finally timba is dance music.

What is it means to you that you perform in this year’s Gere Jazz Festival?

It will be the first time that we play in Gere Jazz Festival. It is a honor that we can be part of such demanding concert. It is good to see the similar initiations in Hungary. Last summer I visited Villány first time, and albeit I stayed only a short time, we will surely return beside of the festival too.

Do you have connection to wine?

In my family I have an oenologist, so I gladly speak about wine if there is chance for it. Last year the band played in several wine festivals, where we had the chance to taste wines from Balaton and the Mátra regions. My favorite wine experiences are attached to similar festivals, where we can match the concert with wine drinking. For the band such festival is not only a work, but also an experience.

Usually I like dry reds, and I am looking for the “one” among them. Now I have a favorite: syrah wines are my big favorites nowadays, even among Gere wines the syrah is number one for me. My acquaintances know this so recently I got a bottle of this as a present.