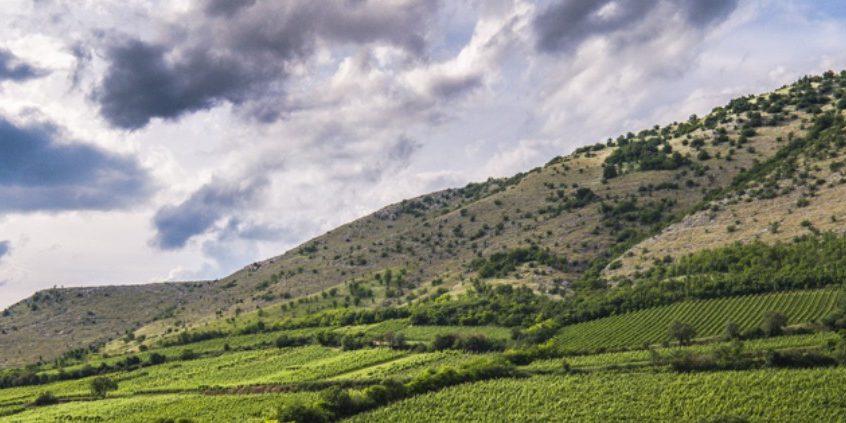 In the old times many white varieties grew here mainly welschriesling but after the fall of socialism, at the beginning of the quality production everybody planted blue varieties which fit to the characteristics of the region. We planted Merlot and Cabernet Franc vines in 1995 then 2 hectares of Cabernet Sauvignon and some Medoc Noir also. Totally we have 17 hectares here.

The upper two-third of Szársomlyó-hill is a well-visible barren area where the limestone basic layer can be seen – this is the origin of the name of the vineyard (kopár=barren). Going upwards from the piedmont the soil gets thinner and thinner and beside of the altitude the angular offset also changes: the piedmont is declivous, going up is steeper. The vines bring smaller but concentrated bunches rich in minerals.

Because of the lack of plants the ground gets hot easier and does not cool down during the night, radiates back the heat, so there are no big temperature differences between days and nights – the grape develops quicker. Due to the southern location the sunshine hours are the higher on Kopár in whole Hungary. Due to its steepness and the angle of incidence of the Sun the difference of the ripening time of the grapes here and elsewhere can be even a month.

The western part of Kopár facing toward Nagyharsány has a different name. This slope is called Szarkás-vineyard by many up to this day. The best basic material of the top wines of Gere Attila Winery is grown here. This vineyard carries mostly that Mediterranean style which is shown in the ripe character of the wines. That grapes which were harvested from such location and soil can give nothing but big wines.